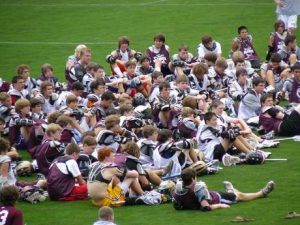 Here’s what people are writing about Coach Pilat’s Lacrosse Camps:

“Just wanted to send you a quick thank you.  My son loved the camp – felt it was challenging – said he couldn’t feel his legs when he got home.  He will be entering the high school arena with self confidence gained from his experience at your camp.  Thanks again.  I am sure he will want to come back again and again.”  Parent from Maryland

“Just a quick note of thanks to you and your staff for an excellent camp session.  Your lax camp’s reputation is well deserved.  My son really enjoyed it and learned a great deal.”  Dad from Virginia

“Just a quick note to let you know how much my son enjoyed your camp this week at Roanoke College.  Having played lacrosse for less than a year, he learned a great deal and made some friends as well.  Again, thanks for giving him a great experience and deepening his love for this sport!”  Mother from Kentucky

“Yesterday I spoke to another parent during a lacrosse game.  He happened to also be a former goalie for Hopkins!  I asked him for a list of camps that are excellent for goalies and he only spoke of yours!”  Parent from Maryland

“Thanks a lot for letting me come back to the Goalie School.  I had even MORE fun than I did last year, and I’m looking forward to coming back next Summer.   Camper from Pennsylvania

“I just wanted to thank you for the absolutely wonderful experience my son had at camp. He is so pumped about his high school tryout.  You helped him tremendously.  My husband and I were very impressed with your camp and the way that it was run.  We also want to tell you that your assistant coaches were so wonderful to the boys.  Our son has NOT stopped talking about how much he learned and what fun it was to meet such nice guys. We even took him to see some of the colleges where your staff member played lacrosse.  We just wanted to let you know how glad we were to have sent our son to your camp.  You will definitely see him again.  Thanks again for all of your efforts.”  Mom from Virginia

“I wanted to take a quick moment of your time to let you know that my son had a wonderful time.  This was his first “away” camp experience and it was much better than he ever thought it could be.  He was so excited to tell me about every drill, every scrimmage and the fun he had meeting the other campers.  He even went on to rave about how good the food was!  You and your team of coaches and student counselors made a great impression on him.  I am impressed, as a parent, how open and honest your student coaches were with the campers on the importance of doing well in school, being a well rounded student, having a great attitude, etc.  I am happy that he heard these essentials from a group other than his parents, as this is something we are constantly reinforcing with him.”  Mom from NC

“Just wanted to let you know that my son received an award from his coach for specialist of the year!  He has progressed as he has because of what he’s learned from your camps.  Thank you!”  Mother from Florida
“I personally wanted to thank you for helping me achieve these accomplishments (All Star selection, State Quarterfinalst, Best Goalie Award, First Team All State). Because they have definitely meant a lot to me and I believe they could probably not have been attained without the guidance and wisdom you and the other coaches provided at your camp.  Along with a handful of memories, your camp was able to show me the skills necessary to succeed in the sport of lacrosse, as well as the close bonds that are made because of this cherished sport as well.  I most sincerely thank you and your staff, and I hope everything works out for you in the upcoming seasons.  Thank you once again, and take care.”  Camper from California

“I know it’s corny, but my sons success in Goal is attributable in large measure to the positive reinforcement received at your camps.  This summer at a recruiting camp in Baltimore, he said over and over again “I can beat anybody” (and he almost did!).  He is very positive about each game, win or lose, and this was learned from counselors at the camps.  Well done.”  Father from New Jersey

“Please allow me to share a good day.  My son just signed with a top Division III lacrosse team.  It started at your camps.  Thanks to you so far a state championship, all league and now this.  Like I said it started with you.”  Father from Maryland

Organization is a given at Coach Pilat’s Camps:

“Thank you for running a very organized camp.  Joseph had a fantastic time and learned valuable skills and made some good friends from all over the country along the way.  Father from Virginia

“My son had a great experience at camp and really wants to go back again next Summer.  Thanks for everything that you have done – I have never seen him be so excited about working hard and he loved the camp”.  Mother from New Jersey
“My son attended a couple of camps this summer.  Yours was especially well organized and easy to navigate, as a person arriving from out of state.  We appreciated the airport shuttles, reminders and help facilitating our arrival and a great time at camp.”  Mom from CA

“First, thank you!  My son had a great experience and everything I had been told about your camp was true.  I was worried because he is a rising 6th grader but my worry was unnecessary.  He is looking forward to his next camp.”  Mom from DC
“Both of our children have grown up going to lots of sports camps.  Usually the kids had fun, but they always felt the staff never really cared about them.  On the drive back from camp, Tim absolutely raved about your camp and he continues to do so.  He said he learned so much – claiming it was the first camp that he felt really helped him improve.  He even told Kevin Corrigan, the Lacrosse Coach at Notre Dame whos son plays with Tim, how great it was.”  Mother from Indiana
“My son has gone to lacrosse camps at big name Division I Universities and top pro player camps over the years.  He had nothing but great things to say about your Goalie School.  He told us that the training was superb and he improved more in those few days than at all the other camps”.  Mother from NY
“I just wanted to tell you that my child attended your Goalie School laws week and it was by far the best camp ever!  I promise we have spent a lot of money on camps and private lessons and they learned so much at your camp.  Most camps simply don’t focus enough on goalie instruction!  This was by far the best choice and investment we have ever made in our childs future as a goalie.